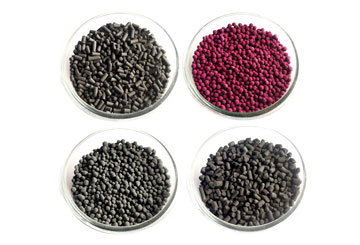 BRYSORBâ„¢ series offers range of combination of Activated Carbon and Activated Alumina impregnated with various impregnates which neutralizes various gaseous contaminant such as H2S, SO2, Cl2 and NH3, and widely used for gas phase filtration.

A perfect blend of  BRYSORBâ„¢ 508 and BRYSORBâ„¢ 520 for optimum removal of harmful and odourous gases such as Ozone(O3), Hydrogen Flouride (HF) and various other VOCs.

BRYSORBâ„¢ 515 chemical media is basically lowering or raising of the pH to a neutral condition with a change of state from a gas to a solid, stable salt. This is good to remove gases such as Hydrogen Sulphide (H2S), Sulphur Dioxide (SO2) and Chlorine (Cl2).

BRYSORBâ„¢ 520 granular media is pure Activated Carbon. This is neutral in nature.

BRYSORBâ„¢ 520 is the media in which one substance gets attracted and adheres to the surface of another. Atoms & molecules are held to gather in a solid by physical forces, as strong as vakence (chemical) bond and as week as Van-er-Waalâ€™s (physical) attractive forces. This remove toxic gases such as Chlorine (Cl2), Nitrogen Oxide (NO), Carbon Disulphide (CS2), Toluene (C7H8), Isopropylalcohol (C3H8O) and trichloroethene (C2HCl3).

Bry-Air offers latest technology in gaseous adsorption â€“ Gas Phase Activated Carbon process which greatly increases the adsorption capacities of Activated Carbon. The Phosphoric Acid (H3PO4) impregnation is done in such a way to ensure uniform distribution across the entire volume of pellet so that the target gas will react with chemical media.

The chemical media used in chemical filter is consumable and cannot be regenerated Therefore it has to be replaced whenever consumed. Determining the time of replacement is important so that media is not replaced when its life is left or we keep on using the system once the chemicals are consumed also.

Bry-Air has in-house lab to ensure that the media is checked at regular interval and changed at appropriate time. Bry-Air provides you the facility to check the â€œlifeâ€ of chemical media free of cost. Just send us the sample of the chemical media to us and we will let you know the life of chemical media.